How To Solve Most Mole Calculation Questions – Part 1

The chapter on moles calculation can be very confusing. With so many different formulas, the common complaint I hear from students is… “How/Where do I start?”

Well, whether you are doing combined chemistry or pure chemistry, the surprising fact is this – most mole calculation questions can be solved in 3 steps! These same steps can be used repeatedly, over and over again, no matter how they twist and turn the question!

Before I get to the 3 Step Method, here’s a nifty flowchart you can use if you haven’t already memorised the formulas! 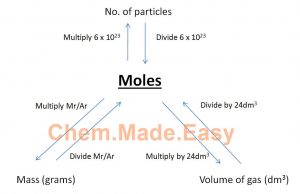 Step 1 – Find the number of moles

The first thing you want to do when you come across ANY mole calculation question is quickly look through the given information and calculate the number of moles of substances given!

E.g. A student adds 48g of Mg to a solution of CuSO4. Find the mass of Cu obtained at the end of the reaction.

How Questions Can Become More Complex

Ok. Before some of you cry foul and call me a cheat, I must admit – that was an oversimplification of the chapter on moles…

As some of you would have suspected, there are a group of teachers who will spend most of their free time, thinking of ways to make questions more… interesting!

The first type of question is exactly the same as what I describe above. This is the most basic/simple type of question. It usually comes out ONLY in combined chemistry papers…

So if you take PURE chemistry… your chances of getting a question like this are close to…. almost 0. =)

This type of question is slightly more complex.

You are given information on BOTH reactants. So the question is… which should you use in the mole ratio step? To determine which reactant to use, you will need to establish which reactant is in excess and which is limiting.

The way to do this is as follows:
a. Find the number of moles of both reactants.
b. Choose 1 reactant, either one is fine, use the mole ratio and determine if the other reactant is excess or limiting.

Perhaps an example would paint a clearer picture…

In the above reaction, 10g of methane, CH4, reacts with 5g of oxygen to form carbon dioxide and water. Find the volume of carbon dioxide gas produced.

As we are given information on BOTH reactants, we need to first figure out which is excess and which is limiting!

Choose 1 reactant (up to you!) – I will choose oxygen.

Once we know which reactant is limiting, we will use the number of moles of the limiting reactant and go back to the 3 Step Method to solve for unknown!

Let me give you an analogy…

Since we only managed to bake a 1kg cake, 1000g, then the mass of sugar needed is only 200g. (Notice how we didn’t make use of the given information on the eggs!)

Congratulations! You made it to the end of a very very long blog post.

One of the fastest ways to improve is to practice more questions. So, go grab your questions on moles, and test out the 3 step method! As always, if you have any questions, feel free to contact me via the contact page here, leave a comment in the box below! I promise I will try to reply ASAP!